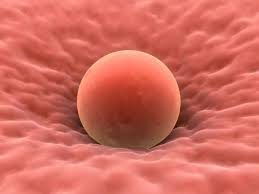 If you are trying to conceive, then knowing when you ovulate is very crucial. It can be a deal-breaker! If you have sexual intercourse outside this very limited time, you will likely not conceive. Everyone ovulates at a different time, but there are ways and tricks to pinpoint the exact or rough time of ovulation. If you would like to know when do you ovulate after your period, you should understand how your body works.  You can only get pregnant when you ovulate. Ovulation occurs when an egg is released from the ovary and begins to move down the fallopian tube. That is when a sperm if available fertilizes an egg. The chances of pregnancy change according to what day of your cycle it is. If we take an average cycle of 28 days, a woman is usually only fertile up to seven days. So, finding out when you ovulate can increase your chances of pregnancy drastically. Ovulation tests can help women indicate when they are ovulating. So, this post will help you answer the question of when to take an ovulation test and when to baby dance. 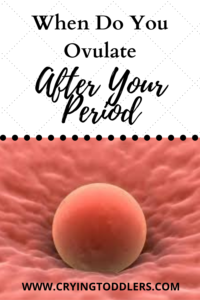 Disclaimer: This post may have affiliate links. If you purchase something I may earn some commission and it should not cost you any additional fees.

Also, I am not a doctor and this should not be taken as medical advice. Contact your doctor for any questions you have. This post is only for informational purposes.

When Do You Ovulate After Period?

Firstly, ovulation is the release of an egg from an ovary. Usually, a high level of LH causes your ovaries to release an egg that survives approximately 24 hours. If it meets a sperm, it has a chance of becoming a baby. If it does not meet any sperm, it will die and be release with your next period.

Click here to read more about what is ovulation.

So, when do you ovulate after a period? The fertile window, the time period in which you may get pregnant, is usually 6 days. 5 days before ovulation days and the day of ovulation. It is wrong to calculate your ovulation date based on how many days you have passed after your period. Instead, count how many days it is approximately before your next period. Usually, 14 days before your next period is the day of ovulation. But, this is just a guess. To calculate a better estimate, continue reading. 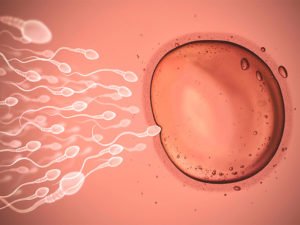 It is important to look for symptoms of ovulation. They are quite recognizable if you actually look for them.

Here are some signs.

Did you know that some people ovulate more than once a month?

How To Pinpoint The Exact or Approximate Time Of Ovulation

When Should I Have Sexual Intercourse For Conception?

If you want to have a specific gender, read this article “How To Choose The Sex Of Your Baby.”

You could also have sexual intercourse every other day for the entire month. Keep in mind, if your partner has a low sperm count you should save up and only focus on the fertile window.

If you and your partner have no infertility problems, you should be pregnant within the first 6 months of trying this method. If you would like to increase your chance of conception and conceive even more quickly, then you should read this article “Tips and Tricks To Get Pregnant Quickly.”

What If I Don’t What To Get Pregnant

If you are trying to prevent pregnancy, trying to predict your ovulation date and not have sexual intercourse around the fertile period is not the way. You may make a mistake in predicting the date, your partner’s sperm may survive more than you anticipate. The best way to prevent pregnancies is by using a contraceptive. Talk to your doctor about birth control options.

Read “Different Types Of Birth Control” to learn about the different birth controls.

How to take an ovulation test?

Ovulation tests are simple. They detect a specific hormone called LH, luteinizing hormone, which usually peaks as you get closer to ovulation. The test should always have two lines. One of the lines is the control line. This line should always be dark, and this would indicate that the test is working appropriately. The other line may be dark or faint and this would indicate how far you are from ovulation day. The more the luteinizing hormone there is, the darker the test line would be.

Here are some instructions you should follow. You should pee in a cup. This would decrease the number of mistakes that may occur. Dip the test but make sure the urine does not go beyond the line shown on the test. Wait five minutes and read the results. If you only see one line, then the test is faulty.

Ovulation tests are not like pregnancy tests. Do not take them when you first wake up in the morning. Instead, get rid of your first-morning pee. Hold your urine for three to four hours, and use that urine. The urine should look concentrated (not clear). The best time to take it is between 12 pm and 8 pm. That is because usually luteinizing hormone surges in the morning and it takes a few hours to appear on a test.

When to take an ovulation test?

As mentioned above the best time to take an ovulation test is between 12 pm and 8 pm. Now, let’s talk about which days you should take the test. Ovulation tests cost money so taking them every day and more than once a day would be costly. So, let us get to it!

How to read an ovulation test?

Reading ovulation tests may be confusing. So, let me help you!

Post your ovulation tests in the comments below. I can help you decide whether they are positive or not and when to baby dance.

This was such a great article. Thanks so much for all the information that you provided!

This was a really good article. I appreciate you sharing this info and how you laid it out for women to understand.

I have been fortunate to have a few of those symptoms so it’s been pretty easy for me to know when I ovulate. I also really love the app Fertility Friend to track my periods.

I have PCOS so I relied on OPKs as I ovulate randomly to know when I was ovulating. Physical signs can be helpful but aren’t always accurate.

Fantastic post! I will pass this onto a friend who is trying to have a baby. Thanks for writing this up!