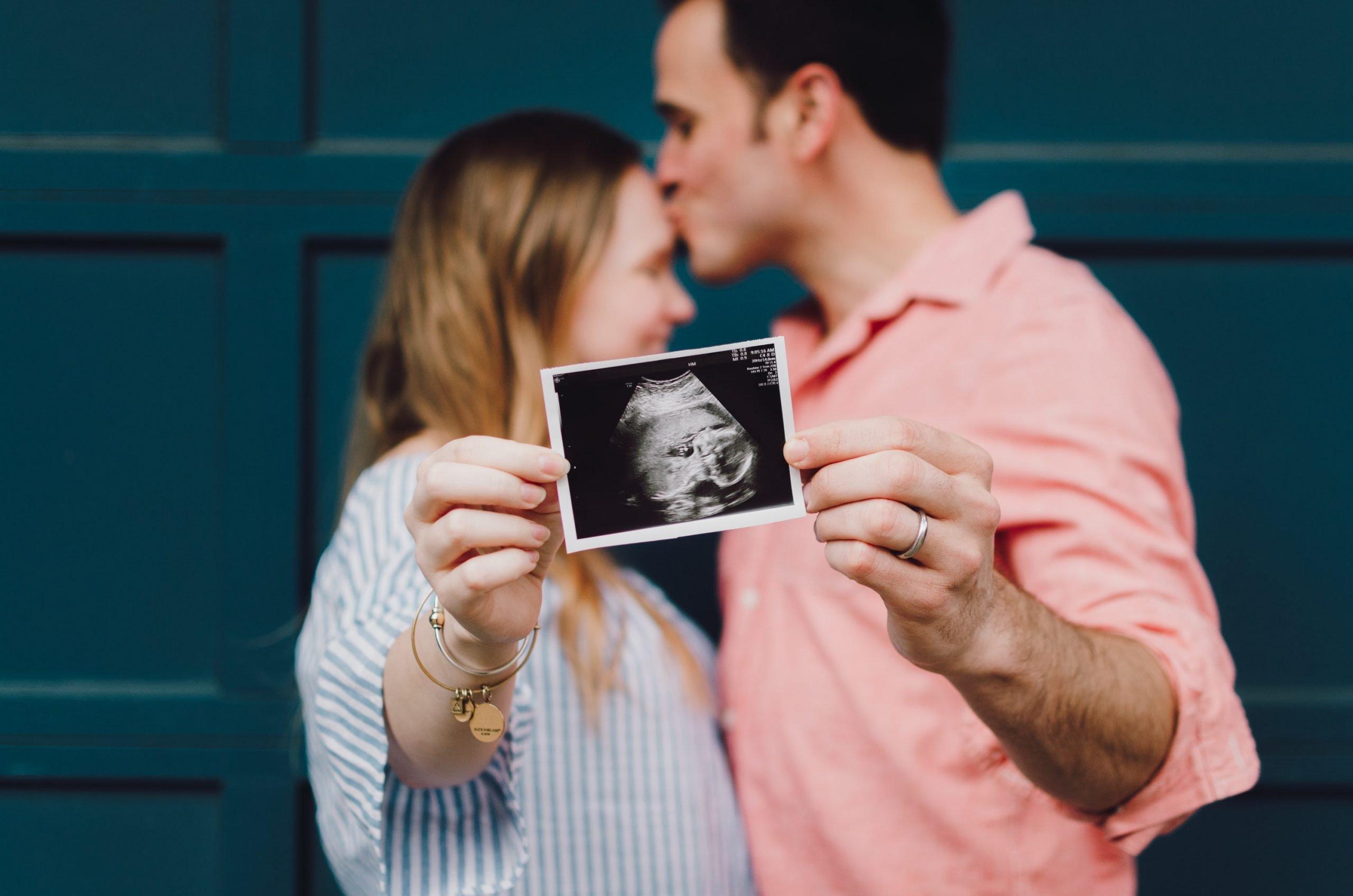 Congratulations, you are 6 weeks pregnant. You probably found out you are pregnant about a week or more ago and are so excited! But, the anxiety of having a miscarriage is so high. You try to stay positive, but the next thing you know you wipe and see blood . It is scary to see blood when you are 6 weeks pregnant, and you are probably thinking that you are having a miscarriage. But, luckily that is not always the case. There are so many reasons this can occur. I know people who were 6 weeks pregnant and they bled very heavily more than once during their pregnancy and know they have a beautiful healthy child. So, if you want to know more about bleeding during pregnancy 6 weeks, keep reading.

Disclaimer: This post may contain affiliate links. I may earn a small commission if you purchase something at no additional cost to you. also, this post is for informational purposes only. I am not a doctor and ask your doctor if you have any concerns. This should not be taken as medical advice. 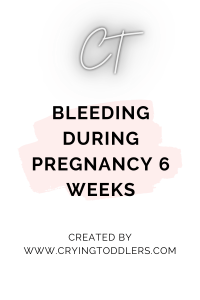 How big is the baby at 6 Weeks?

Congrats! You just entered your second month of pregnancy. At 6 weeks, your baby is about 5 mm. Your baby looks likes a tadpole with a tail. The heart beat may be seen via ultrasound during this week. If you want to imagine its size, it is like the size of a pomegranate seed. You cannot feel your baby move because it is not big enough, but it is big enough to see on an ultrasound. Most women get ultrasounds during their 8th week of pregnancy, so you may not see it on ultrasound at this time. But, it is good to know how it looks on ultrasound now. The babys lungs and other organs have begun developing. Eyes will also start developing now in addition to hands and feet.

Your tummy might be a bit bloated because the progesterone increases with pregancy. Progesterone slows down the digestive system causing constipation and bloating. Your baby is not big enough to cause a pregnancy belly yet.

Also, if you are carrying multiples, it will probably not show yet during this week via ultrasound. Your HCG levels may be much higher than a single pregnancy but that would probably be the only sign you are pregnant with multiples.

Now, let’s talk about what is happening to you. Your baby is getting deeper in your uterus now. You are producing high amounts of HCG, the pregnancy hormone. This causes the symptoms of pregnancy. Usually, women begin feeling symptoms at 6 weeks of pregnancy. But, that does not mean if you are feeling any symptoms that there is something wrong. It is totally normal, and you are one of the lucky ones. For those who are feeling symptoms, you may feel tender breasts, fatigue, food cravings and aversions, increased urination, bloating, constipation, light cramping, and morning sickness. You may have a few of these if not all.

Are you having morning sickness, click here to learn ways to decrease the nausea and vomiting. You should call a doctor is you have bleeding, abdominal cramping, pain when urinating, swelling of the body, fluid leakage, headache or a fever.

Causes of Bleeding During Pregnancy 6 Weeks

At 6 weeks, if you lose the baby, it is considered a miscarriage. But, bleeding at six weeks can indicate a possibility of miscarriage and can indicate something else. Bleeding from a miscarriage can be red, pink or brown in color. You may have some lower abdominal pain and a backache. Go to the emergency room if you think you are having a miscarriage. It may start off as spotting then become more painful and heavier with time. Or, you can begin passing clots right away. Either way call for help.

An ectopic pregnancy is a pregnancy that grows outside the uterus usually in the fallopean tubes. If you feel abdominal pain, pain in the shoulder or neck, pain on one sire of your belly and/or are bleeding, go to the emergency room. These are all critical signs of ectopic pregnancy. Ectopic pregnancies are dangerous because your fallopean tube can burst. So, do not wait. The emergency room will most likely do an ultrasound to make sure there is a gestational sac in the uterus. You HCG levels may be rising slowly which also may be a sign of ectopic pregancy.

Molor pregnancies rarely occur. This is when a sperm fertilizes an egg but the embryo does not develop correctly and it has abnormal genes producing no baby but placenta or some kind of growth. This tissue grows and releases HCG like a pregnancy would. That is what turns the pregnancy test positive. If you are bleedinh, and have other symptoms like bleeding, passing tissue, and vomiting, call a doctor. Molor pregnancies are not always caught. Sometimes, people only find out when they have an ultrasound done.

Sexual intercourse could cause some bleeding because the cervix is filled with blood vessels and it can be irritated by sexual intercourse. This will cause minor bleeding not enough blood to fill a pantiliner.

This is bleeding under one of the membranes around the baby. This may cause serious complications. It happens when the placenta deattaches itself from the uterus. You may not bleed or bleed so heavily that you may think you ahve already lossed the baby. Go to a doctor! Many people with this still say pregnant and have a successful delivery of a healthy baby.

If you have a blood clotting disorder, you begin spotting and then passing clots until you miscarry. Miscarriage can be prevented by taking certain medication to stop your body forming clots around your baby. The unfortunate part is that you may have more than one miscarriage before knowing you have a blood clotting disoder. The good part is once you find out, medication can manage the situation and you can have a successful pregnancy.

What should I do at 6 weeks pregnant?

-Begin an exercising routine if you haven’t already.

-Attend your first prenatal appointment if it is during this week.

-Plan what questions you want to ask your doctor for the next appointment.

-Eat better and stop all bad habits if you haven’t already.

-Think about when you should buy maternity clothes.

-Begin a baby registry. It is never too early.

-Look up prenatal testing. There are a few tests that would be coming in the next few weeks.

-Do not sit in hot tubs or saunas.

What are the chances of miscarrying at 6 weeks?

Once you hit 6 weeks, you have a 13.5 percent chance of miscarrying. However, if you see or hear the heartbeat of the baby during this week via ultrasound, the percentage decreases to 10 percent. Hearing the heartbeat is a great indication that things are going well. As the weeks pass by, the percentage of miscarriage will continue to decrease. So, keep your mind off of miscarriage by, for example, planning your pregnancy announcement. Stay positive!

Click here to read how to stop bleeding during pregnancy.

Bleeding at 6 weeks probably indicates there is something going on, but it does not mean you will definitely have a miscarriage. Stay positive, and go to a doctor if you have bleeding during pregnancy 6 weeks. Trust me when I say that going to a doctor is very important if you want to avoid a miscarriage. If you have any concerns or questions, please leave a comment below and I will reply as fast as I can. I am not a doctor, but would love to give my advice to you guys. I love seeign women helpign each other. So, write your symptoms down and say what was the problem and if youw ere able to treat it, how you treated it. Again, stay positive everyone!

Have you read the following?

How Not To Gain Weight During Pregnancy?

What To Eat During Pregnancy?

What Is Chemical Pregnancy?

Where To Have Baby Showers?